How to Fix the Health Crisis 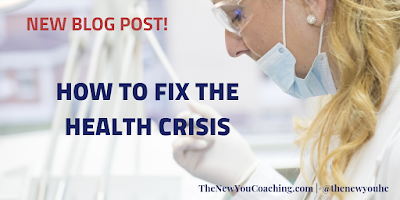 There can be little doubt that we are in the middle of a health crisis in the United States and it is rapidly being exported to the rest of the world. Obviously there is no simple solution to a very complex problem, but I would like to propose, at least, a start.


King for a Day


One of my favorite podcasts is Mark Hyman's The Doctor's Farmacy. In this podcast, he interviews well known figures in the areas of functional medicine, nutrition, health, and spirituality. One question Dr. Hyman always asks each guest is, "If you were King/Queen for a day, what is the one policy you would like to enact to have the greatest impact?" As I listen to his podcast, I like to think about how I would answer that question.

In a recent episode with Dr. Dariush Mozaffarian, I was very intrigued by Mozaffarian's answer to this question. Since listening to the episode, I have been thinking more and more about this. So I decided to write out my answer this question in this week's blog. If I were King for a Day, this would be my "executive order."

The following measures are to be implemented immediately:


While I know there is very little likelihood of this actually happening because it would be violently opposed by the medical establishment, big pharma, big food, big soda, and the agriculture lobby. However, I do think it is a system that would in time allow these industries to continue to do business, just under a more healthy and sustainable model. The only way to make this work is to involve big business and allow them to continue to be profitable.

The problem that we see right now is that almost all of the big players are rewarded for keeping us sick. Obviously, big pharma and the medical establishment makes more money if the general population is chronically ill. Currently, big food is rewarded with tax breaks for producing highly processed, unhealthy food that contributes to diabetes and obesity. Likewise, farmers, both small and industrial, are rewarded for producing crops that are designed primarily to feed animals rather than humans. In addition, their subsides support wheat, corn, soy, and dairy which contribute to many chronic diseases.

Therefore, my solution is to simply flip the rewards. If we can reward these industries for keeping us healthy rather than keeping us sick, they will be motivated to do so. While we may never be able to make this palatable for big pharma and big medicine, we can certainly do this for other industries.

I would love to hear your ideas either in the comments or by contacting me directly. 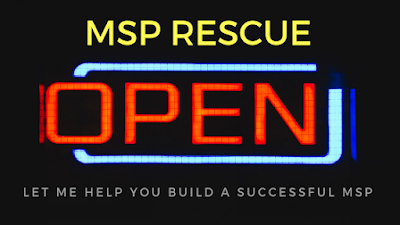 Over the past month, I have been busy working on a new project and I would like to unveil it today. As you may know, I have worked in IT for over 25 years with the last 12 or so years being an IT Consultant. My long term goal was to eventually work as a "consultant to the consultant" helping new IT consultants start and develop their business. Well, as they say, the future is now. Recent circumstances led me to start this now. Thus, MSP Rescue was born!


What is MSP Rescue?


MSP Rescue is a service to help sole IT consultants or small managed service providers (MSP) build their businesses. This involves a few services:


Why I Started MSP Rescue


Throughout my career, I have always been passionate about working with small businesses and helping entrepreneurs attain success. To that end, I decided to focus on helping smaller MSPs and consulting firms (especially, one or two person operations) be successful and learn how to compete with the "big firms." I believe that by following the right steps, you can build a successful IT consulting business and I want to help you do just that.

In particular, I have learned that "selling" services, and especially IT services, is vastly different from selling products. Unfortunately, many sales books, seminars, and techniques are designed for selling products and do not translate well to selling services. I want to help IT consultants learn how to market and sell their services, so they can build successful MSP companies.

In addition, I also have have a new MSP Rescue blog that comes out on Fridays:  msprescue.blogspot.com

Posted by Mark Andres at 9:07 AM No comments:

Is Sugar the New Cocaine?


Cocaine comes from the coca leaf, native to the northwestern regions of South America. In its natural form, the leaves have been used as a traditional medicine to treat altitude sickness, digestive issues, and headaches. Used as both an anesthetic and a pain reliever, the coca leaves were considered a sacred plant in traditional Andean cultures. They would chew the leaves or make a tea (mate) from the leaves.

To become cocaine, humans process and refine the chemical compounds in the coca leaves to produce the white powder that we call cocaine or Benzoylmethylecgonine. In fact, cocaine is so processed, that eating or ingesting cocaine typically has little or no effect because it is neutralized the acid in our stomachs. To get any effect from ingesting cocaine, you typically have to consume it with a highly alkaline substance such as lime. This is why cocaine is typically snorted or injected.

In sum, in its natural form, coca leaves provide a mild analgesic and stimulant effect and were prized in traditional medicine for their curative powers. When you refine it into a white powder, it becomes dangerous and very addictive. What about sugar?

In nature, sugar is found in many plant-based foods such as fruits and vegetables as well as in milk. In breast milk, the lactose (milk sugar) is there to provide energy for a growing baby. However, humans, like all other mammals, are evolved to stop drinking milk after being weaned. The sugar that is found naturally in plants is accompanied by fiber. Even a sugar cane, the juice of which is used to make table sugar, is very fibrous.

Sugar cane, sugar beets, and many fruits all have a high content of sugar. However, typically, those foods that are high in sugar are also high in fiber. For example, a mango has a lot of sugar but also a lot of dietary fiber. The fiber helps to slow the absorption of the sugar into the blood stream, preventing the blood sugar spike that you get from eating processed sugar.

Like cocaine, humans process and refine these plants until you end up with a white powder: sugar. Alternatively, they take corn, which is produced in an extreme over-abundance in the United States, and they process the corn to extra the fructose, leading to high fructose corn syrup.


While still not accepted completely in scientific literature, increasing research shows that sugar is highly addictive. The study that stands out is one where rats that were addicted to cocaine gave up cocaine for sugar or saccharin and became addicted to those instead. Here is the original journal abstract.

There are some who oppose this view. Here is a journal article that disputes the addictive nature of sugar in humans. One thing to note is that the food and sugar industry regularly sponsor research that only gets published if the results shine a positive light on sugar or other processed foods.


Which brings us to the food and sugar industry. If I told you that the manufacturers were adding cocaine to baby formula in order to get babies addicted to cocaine so they would later crave and buy foods with added cocaine, you would probably freak out. However, that is exactly what is happening with something even more addictive. Baby formula has added refined sugar and this is exactly what the food industry wants. Over the last several decades, the food industry has purposely added sugar to more and more foods to get consumers both addicted to the sugar and hooked on the "sweet taste" of foods. Here is a graph that shows the increase in sugar consumption over time in the US. 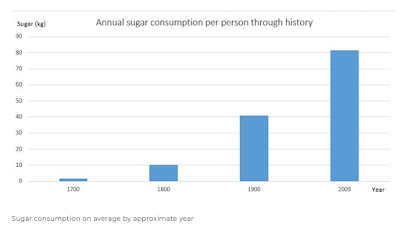 
If you would like to kick the sugar habit, I have a free gift for you. I created an e-book with eight simple steps to help you kick processed sugar and end your addiction. It is free for anyone to download. Just follow this link.


I am back after a week off. I am working on a new big project and I will be unveiling that project in next week's blog.

Mark Andres
After working in IT for 25 years, I decided to become a Transformation Coach and help middle aged people have more energy and feel healthier all without radical diets or militaristic exercise. My passion has always been personal development, and recently, I have become increasingly interested in nutrition, health, and disease prevention. This led me to become a certified health and life coach. I truly love being in service by guiding others to achieve their health and life goals. www.thenewyoucoaching.com