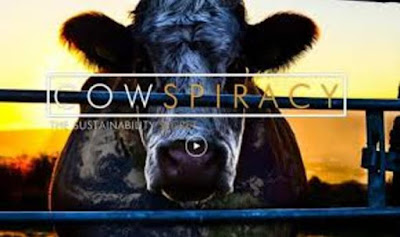 From time to time, I would like to add in book or movie reviews that I think are helpful. Here is a movie review of an important documentary that I believe all Americans should watch.

This film by Kip Andersen looks at the primary cause of green-house gas production: animal agriculture. Andersen explores the levels of destruction that factory farming has on the earth and the environment. He asks the question, "Why are environmental groups ignoring this?" He points out the real inconvenient truth behind Al Gore's "An Inconvenient Truth."

Throughout the movie, Andersen tries to meet with large environmental groups like Greenpeace, The Sierra Club, Oceana, and the WWF to see what their position is on animal agriculture being the main cause of environment destruction. Time and time again, he is turned away. He also attempts to talk government officials with the same basic results. In between, you get commentary from experts willing to talk about the real issues. Finally, Andersen intermingles cases where the animal agriculture business has used influence, intimidation, and even murder to protect their turf. He notes that groups continue to focus on fossil fuels as the cause which animal agriculture is responsible for a much higher percentage of green house gas emission.

Mark Andres
After working in IT for 25 years, I decided to become a Transformation Coach and help middle aged people have more energy and feel healthier all without radical diets or militaristic exercise. My passion has always been personal development, and recently, I have become increasingly interested in nutrition, health, and disease prevention. This led me to become a certified health and life coach. I truly love being in service by guiding others to achieve their health and life goals. www.thenewyoucoaching.com